For the month of December, Wayfair UK are donating £50 to Habitat for Humanity, an organisation that helps the poorest and most vulnerable people lift themselves out of poverty by partnering with them to build their homes and communities, for every act of kindness they find from a blogger. All we have to do is write a blog post about something we have done to give back and they will donate. To me this was simple, I was going to do it.

I was racking my brain on things I could do and then it came to me, I was due to give blood on Monday 14th. I hadn't planned to write a post about it but I thought if it means that Wayfair UK will donate then why not.

So Monday just gone I got my mother in law over to watch the boys and popped on down to the town hall. I have never given blood before and I was a little nervous but knew it was all for a good cause. I had read the whole actually giving blood would only take 5-10 minutes so thought it would be over and done with in no time at all.

I arrived on my allotted time but had to wait about half an hour to be seen. I had been informed that they were very busy and were having to turn people away so it was a good thing I had booked. To be honest I didn't mind waiting, I didn't have the kids and could catch up on some social media.

I was then taken to the side behind some screens where they tested my blood to see if I was anaemic, thankfully I wasn't, and to go through my questionnaire to make sure they were ok for me to give blood.

They were very kind and made me feel at ease, I think they saw the nervousness on my face. The giving blood part was painless, apart from the tiny pin prick to begin with, and relatively quick.

Once finished I was taken over to a table full of drinks and snack. I was advised that as a first time blood giver I was to just stick to cold drinks but to eat as many mince pies and biscuits as I liked, which I did! They recommend you stay there for about 15 minute just to make sure your ok and after that time I was bursting for a wee. I got up to go and a kind gentleman told me to go careful and if I wasn't back in 2 minute he would get someone to come and see if I was ok.

After my toilet break I was then off, but not before booking in to give blood again next year.

I was feeling ok until about 20 minute of being home when I went a little light headed. Thankfully my mother in law was still there and she made me eat a cookie, there was no arguments from me, and made me a cup of tea with a sugar.

It has always been something that I have wanted to do but I have never had the guts to do it. After having the boys my pain threshold is higher and I am no longer scared of needles so now seemed a great time to go and do it. 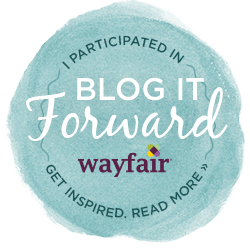