Easter Fun For All The Family - DVD Bundle Giveaway 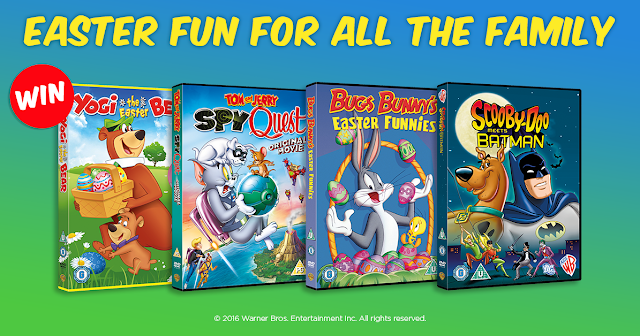 With such unpredictable weather this Easter holiday, it's hard to plan what to do with the kids. As every parent knows when it is raining there is only so much CBeebies and Disney Junior that children, and us adults, can watch. So to make the Easter holidays that little more bearable and to keep the kids smiling I have a 4 DVD bundle to giveaway to one lucky reader.

There's fun for ALL the family this Easter with this DVD package from Warner Bros. Home Entertainment, including:

In Yogi The Easter Bear, the Easter Bunny has been captured by some crooks who want to spoil the holiday. Can Yogi and Boo Boo rescue the Bunny before the Ranger sells them to the Siberian Circus? A holiday adventure for the whole family.

Bugs Bunny's Easter Funnies is the must-watch animated compilation for Easter. Bugs Bunny refuses to deliver Easter Eggs, forcing his cartoon friends to go and hunt them out themselves.

Scooby Doo Meets Batman features two Scooby Doo movie mysteries in which the gang go to Gotham City and join forces with Batman and Robin to fight the forces of evil.

T&Cs
- Prize for 1x winner is 1x Yogi The Easter Bear DVD, 1x Tom And Jerry Spy Quest Original Movie DVD, 1x Bugs Bunny's Easter Funnies and 1x Scooby Doo Meets Batman DVD.
- Giveaway runs from 30th March 2016 at 12am to 5th April 2016 at 12am.
- There is no cash or other alternative to the prize stated and the prize is not transferable and no part or parts of the prize may be substituted for other benefits, items or additions.
- The winner will be picked at random. The prize will be delivered to the winner within 28 days of confirmation of delivery address.
- The Editor's decision is final and binding on the entrants. No correspondence will be entered into.

- The promoter of this competition is Fetch Dynamic Ltd.

a Rafflecopter giveaway
Posted by Something Crunchy Mummy at 00:00