Finding the right childcare and when is the right time?

Finding the right childcare has to be one of the most stressful and hardest thing that I as a parent has had to do in my children's lives.
When Finley was 9 months old I had to go back to work. We were lucky enough that we had parents that would help out with childcare but there was one day a week that he needed to go to nursery. I found the perfect nursery and I was so happy with the staff and Finley grew to love it. Then when I went on maternity leave he had to leave the nursery as it was a 40 minute journey from our house and just not practical. He stayed home for a while but I realised he needed some other child/adult interaction other than me and his baby brother. There is a nursery just around the corner from our house which we enrolled him in for one morning a week. In all honesty I wasn't all that pleased with it and there were certain things I wasn't sure about. It was nothing to do with their care of the children, I just had a feeling. And I don't think Finley was all that settled there.
He was approaching 2 1/2 so I started to look at preschools. I looked at a few and just didn't get that feeling and then I walked into the one he is at now and loved it. I really truly loved everything about it. The staff, the setting, the interior and exterior. They had an open door policy which I think is so important and he cried when we left after viewing it, which had to have been a good sign. So in September 2014 he moved to preschool and we haven't looked back.
Noah has never been to nursery or any childcare provider as I stayed home once my maternity leave finished as this is what worked for us. So I have always felt that there is no need for him to go to nursery as he has this older brother to play with and also have a close friend with a little girl the same age which they spend a lot of time together.
But recently I have noticed that Noah is very shy and wants me to hold his hand with most of the things he does and doesn't really venture off at soft play/playgroups by himself. He also isn't great with sharing and when he wants something he won't take no for an answer. He also has almighty tantrums when he isn't allowed to do something or he isn't allowed something. I know all children are like this at some time in their childhood but it has made me think that maybe a morning a week at a nursery might help him.
But this is a huge thing for me. Because as I am at home I feel that I shouldn't put him into nursery as I am here to look after him. But the more and more I think about it the more I begin to realise it will be a good thing for him and I need to stop being so selfish.
It then comes down to where does he go. I am looking for somewhere that would accept him for 3 hours a week, preferably 9-12 on a day that Finley goes to preschool. Finley's preschool does accept children from 2 and does have space for him on a Thursday morning which is the same time that Finley goes. This would be perfect but then I start to question this idea and come up with negatives and question if it's the right thing.
Will Finley get annoyed with Noah being there?
As the setting is just one building and their is a learning difference due to age, would Finley feel held back as Noah will want to do the same as him?
Would it benefit Noah to go somewhere on his own?
But then would having Finley around help him settle in more?
From January I was planning on putting Noah into the preschool as he will be 2 1/2 but just feel he needs something now.
The whole accepting 2 years olds at the preschool is something I am undecided about. I'm on the committee and from this point of view it makes sense as they need to increase numbers. But from a parents point of view, as it is just one building, the children all learn together and I think when some 2 year old are in, Finley and others his age don't get to do things they like, i.e marbles (Finley's favourite).
I then found a lovely nursery that would work in with the preschool run, but when I called they were full. I need to do some more research on nursery's in the area but the only thing is they are not as flexible as preschools and usually have a minimum of 6 hours per week policy. And financially we can't do that and it's not something we want to do.
So we come back to that the preschool is the best place.
This is such a hard decision as I need to make one that is right for both boys and I don't want it to interfere too much with Finley's learning. Then I think its only 3 hours a week. I am always so scared of making the wrong decision. But I need to remember this is how I felt when I was planning on moving Finley to preschool from nursery.
Why is choosing childcare for our children so hard?! And then I have the added guilt that I shouldn't be sending him until he is 3 because I am home. And I am here to look after him.
I'm sure parenting is just full of guilt and we will always feel we are not doing the right thing. I need to go with my gut and that is saying preschool! 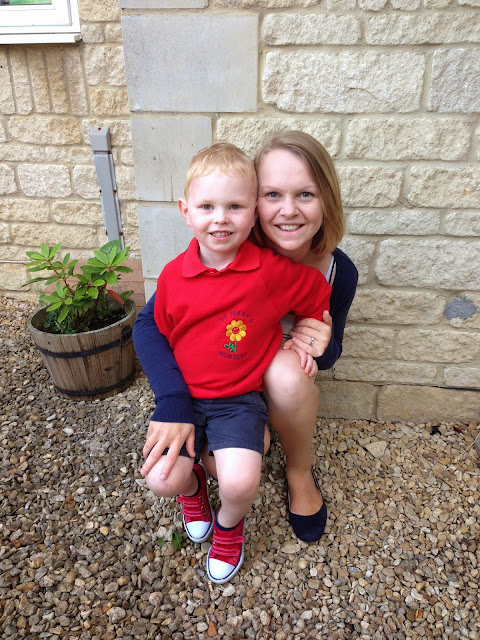 Posted by Something Crunchy Mummy at 12:47